Posted on January 4, 2013 by RIEDEL Fascination 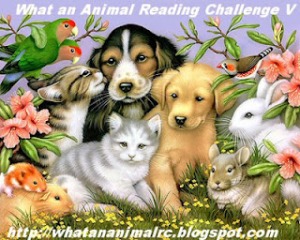 Well, this takes the cake.  I’m churning out early commitments to 2013 activities, after a week of closing 2012 events…  and find myself wonderfully eligible for one that is valid until February!  This is one of many reasons to love people who commence & conclude away from the traffic Jan – Dec circles generate!

This makes 17 groups, all properly finished, for my first time competing.  This indeed sets a record for joining an event latest in the year of all!  I cherish animals and Yvonne chose this adorable portrait for “What An Animal V“.  One of my sweet kittens lays in an office chair beside me, as I begin & close with this post.

I love cat mysteries and clean the clock on this one!  Including reviews, I completed the 21 novels below that prominently feature cats and others.  I discounted 3 that depict cats on their covers but didn’t incoporate them in the books.

I cherish animals, plants, reading, music and free spirituality. I welcome you for articles, literary activities, and interaction! Surrounding ourselves with good people is a delight. I occasionally review at The Book Depository.
View all posts by RIEDEL Fascination →
This entry was posted in Animals Or Pets, Book / Novel / Literature, Cats and tagged animal, felines, Here Kitty Kitty, Miranda James, Mystery Of The Green Cat, Rebecca M Hale, Susan Wittig Albert, Winifred Elze. Bookmark the permalink.

1 Response to Commencing & Closing With Animals